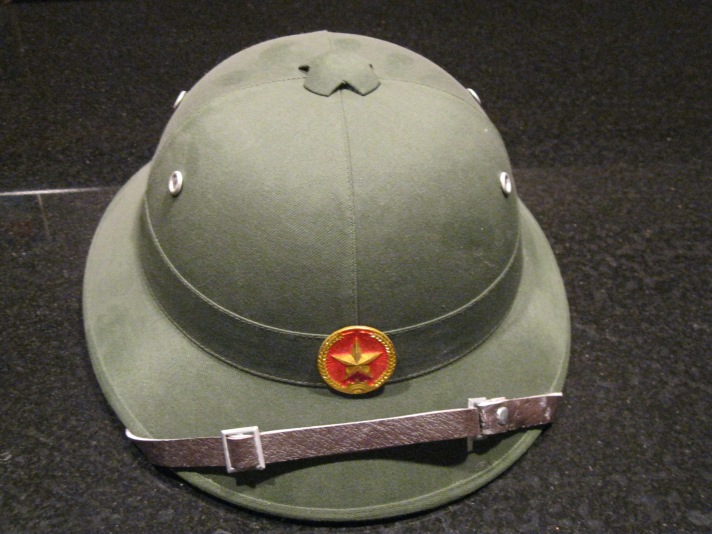 A  Native American Vietnam Era Veteran, Robert, who lost his brother in Vietnam, saw a piece I wrote and gave me a call. He wanted to know if I was able to meet and he would drive from about an hour away to meet me that same day. I said sure assuming that it was pertaining to an upcoming Vietnam Veteran’s Day event for Wisconsin that I was organizing.

We met at a coffee shop and come to find out it had nothing to do with our event, although he and Veterans from his tribe did attend the event as well. There was another Native American Vietnam Veteran named Ralph, also a former marine, who was close to Robert like a brother. Ralph had been in battle when an NVA soldier was killed. He brought back parts of the NVA Soldier’s helmet. He kept it all these years until one day he had a dream. In this dream this former NVA Soldier appeared to him and stated he wanted to get back home to Vietnam.

I am only summarizing the details here, but before this tribe even met me, they were already planning this ceremony on behalf of this NVA Soldier not only as an act of respect, but to help release the man’s spirit back to Vietnam as he had wished. After Robert read the piece I wrote, he said he knew he was supposed to talk to me and I was to be a part of this.

There was no doubt that I needed to honor this request. This ceremony went on for a few weeks with different clans taking turns conducting the ceremony a week at a time. There was a feast and dancing all throughout the night and then different times of the day. There was also singing done in a prayerful manner. Their longs hours of dancing were an act of sacrifice and prayer in releasing the man’s spirit back home.

I was asked to help prepare Vietnamese food for the whole clan, but also so we can set some out for the spirit of the Vietnamese man. My husband was also a part of this and together we cooked the meal. I wore an Ao Dai (Vietnamese traditional dress) and burned incense and said a prayer on behalf of this NVA Soldier.

After several weeks of completing this ceremony, they feel the man’s spirit was released back home and the parts of the helmet were buried.

I participated in this ceremony out of  respect for this group’s act of humanity in trying to honor a former enemy, and to honor this NVA soldier and his family.

Pictures from Ho-Chunk Veteran Ceremony I spoke at

See similar story of another Vietnam Veteran, former Medic I delivered an item back to Vietnam for (part one) – Video will return soon.